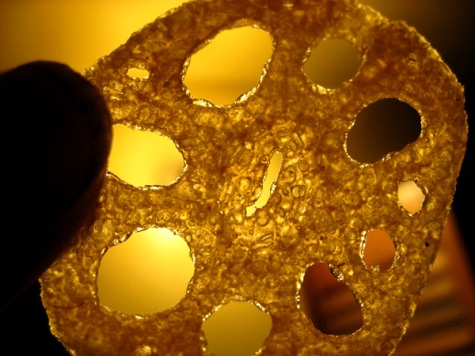 According to Ms. Shimbo, “namban” means “southern barbarian.” This word was applied to the Portuguese and Spanish, the first Westerners who came to Japan in the 16th century. Until that time, the Japanese traded mosty with Koreans and Chinese. “Namban” reflects the shock that the Japanese felt upon encountering Europeans with their large noses and eyes, hairy bodies, and height. Among the new foods and cooking techniques were squash, potatoes, corn, watermelons, chile peppers, figs, sugary sweets, and deep-frying.

Except for deep-frying, all of these things are quite familiar to me. The deep-frying is a story I’ll cover in another post. And yes, I’m familiar with those body characteristics.

Eggplant, kabocha squash, and salmon are deep-fried and then marinated in rice vinegar, sugar, soy sauce, salt, and akatogarashi (Japanese red chile peppers). Marinate for 1 hour to overnight. I made a lot of food, so we’ll be eating this again. A note here: deep-frying eggplant is not for the novice. If the temperature is not just perfect, it absorbs a lot of oil. I’ve found using a wok for deep-frying works best for me with a cooking chopstick sort of set-up to hold the thermometer in the oil. And a roll of paper towels should be included in the ingredient list!

As long as I was firing up oil for deep-frying, I thought I’d make some lotus root chips. (Obviously, I fried this before doing the salmon so they did not taste fishy) Ms. Shimbo has “deep-fried lotus root chips and julienned burdock” in her recipe for “Swordfish in Yuan Style” (page 366) which both Mr. Tess and I have made without those vegetables. The swordfish is pan-fried, and it seemed silly to heat up a pot of oil for what is essentially a snack! As she does not usually indicate what to serve with what-else, this seems especially odd. My other Japanese cookbooks have Lotus Root Chips as separate recipes. And I added salt and sancho pepper to the chips as other cookbooks suggested. Big YUM.

Ms. Shimbo has this recipe in her section of, “Cold Appetizers,” but notes that it could be served as a main course—which is what we did. She does not specify how to serve this recipe as an appy. I think that if one were to do that, one would layer the salmon, eggplant, and kabocha and then cut the stacks in thirds. The smaller portions could then be anchored with a cocktail-pick and eaten out of hand. As it was, we ate dinner with chopsticks. Not so easy to get a “sandwich” of the fish, eggplant, squash in one bite. But tasty. I would, as usual, cut back on the amount of sugar in the marinade next time.

One thought on “Salmon and Lotus”