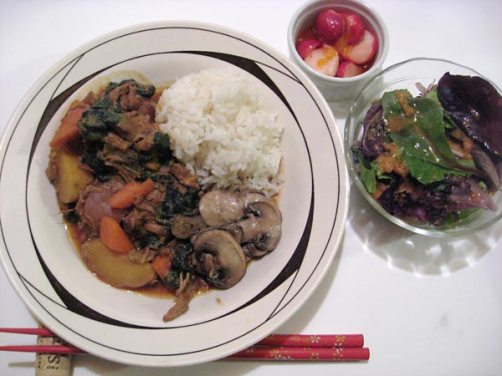 This recipe illustrates how Western ingredients (lamb and balsamic vinegar) and techniques (mirepoix—sauteed vegetables stewed with the meat—then pureed with the broth to thicken it) can be combined with Japanese ingredients (sake, mirin, shoyu, miso, and konbu) and techniques (cooking the vegetables in the stew separately from the meat—see “Braised Beef in Japanese Style”). The resulting dish is certainly Japanese, and also is comforting in a familiar way.

The weather predictions were for temperatures in the single digits (°F) and high winds, so everyone was out stocking up on groceries. One store was sold out of eggs! After searching 3 stores to find a lamb shoulder roast, I bought the last two packages of lamb shoulder chops. I only had 1 1/2 pounds rather than the 2 pounds in the original recipe. I did not cut the meat into chunks as per the recipe; they were just too thin to make 2″ cubes!

I also started the stew the day before so that it would chill so I could easily remove the fat, but this could be cooked all in one day.

Soak the kombu in the water to start getting some of its flavor out.

The original recipe calls for a 2 pound shoulder roast, remove meat from the bones and cut into 2″ cubes. Keep the bones to cook in the stew. I made do with chops.

Heat a cast iron skillet and add the oil. Brown the meat and bones, turning so that it’s browned on all sides. Add the sugar and cook until it caramelizes. Remove meat to a plate.

I added a splash of water to the skillet to get the sugar off the bottom. Add these aromatics (mirepoix) to the skillet, and cook on medium low heat until slightly golden and soft, 5 to 8 minutes.

Transfer the vegetables to a medium pot, spreading them to cover the bottom. Place the lamb and bones over the vegetables. I deglazed the skillet again with a little water, added that to the pot, and added the kombu water to cover the meat. Add the soaked konbu. Add the following ingredients:

Bring the liquid in the pot to a boil over medium heat. It takes about 15 minutes. Remove and discard the konbu—it will make the broth bitter if you boil it. Reduce heat, cover the pot, and gently simmer the mixture for 2 hours.

Or, as I did (suggested in the recipe) put the pot in an oven heated to 350°F. I also sealed the lid as I learned from Molly Steven’s book about braising: Crinkle up parchment paper so it’s edges are around the circumference of the lid and there is a “puff” of paper in the middle. This helps the steam condense and fall back into the food rather than escaping. I think this is similar to the way a Japanese drop lid works.

Note: I always feel bad about throwing the kombo away, but I have so much in the freezer already from making dashi that it’s unlikely I’d use it. It can be used for making pickles, but I don’t know what else to do with it.

OK. Back to the recipe. I stopped the recipe at this point to let it chill overnight to remove the fat. If you are making this all in one day, after 1 hour of cooking add:

I added the shoyu and miso the second day because the stew would take some time to get hot. Soy sauce and miso burn very easily.

While the meat cooks prepare the vegetables:

In a medium pot of boiling water, parboil each vegetable separately until tender but still firm. Cool them in ice water and drain. Cut the spinach into 2″ lengths.

Remove the lamb and bones from the pot. Transfer the meat to a large platter, and cover to keep it warm. Discard the bones.

Transfer the broth and mirepoix vegetables to a food processor and puree them. Return the mixture to the pot and cook a little longer to thicken the sauce. Or use a stick blender.

Return the lamb to the pot, add the parboiled carrots and potato, and cook 5 minutes.

Ms. Shimbo seems to have forgotten about the spinach, but I added it with the potatoes and carrots.

Serve the lamb and vegetables drizzled with the broth from the pot. Either plain-cooked rice or country-style bread makes a nice accompaniment. Mr. Tess discovered some mushrooms in the fridge so he fried them up to eat with the stew. The little dish with the red-stuff is pickled radishes.