It seems kanitama-don is a popular dish in Chinese restaurants in Japan. While we were eating, Mr. Tess said that this dish tasted just like egg foo young! When I was young, I hated eggs eggs were not my favorite; I was unfamiliar with the dish. It’s an omelette found in American Chinese restaurants: eggs are beaten with minced ham (or pork, shrimp or chicken) and vegetables (bean sprouts, water chestnuts, onions), then fried like pancakes (small circles), and served with a sauce made with chicken stock thickened with cornstarch and flavored with soy sauce. Rice on the side.
Research-type info:
Wikipedia notes that creative Chinese cooks in the U.S. invented egg foo young in the 1930’s. Carl Sandburg mentions egg foo yong (alternate spelling) in his 1936 poem The People, Yes. There is a Vietnamese dish called trung hap (I don’t know how to make the diacritical marks over letters) similar to egg foo young. And in Japanese Chinese cuisine you’ll find the dish is called Kani-tama, using crab meat instead of ham or other meats.
According to Merriam Webster online, the etymology of the word fuh yuhng egg white, egg coated ingredients, literallly, a kind of hibiscus. I don’t understand why a hibiscus would be associated with an omelette, but people want to make sense of things. Perhaps because egg foo young is usually fried as round patties, and the petals of a hibiscus flower are round, if you arranged five egg pancakes on a plate they would look like the flower?
Various other sites I checked out say that when the kanitama omelette is served on top of rice it might be (or might not be???) called tenshin rice or Tien Shinhan. The popularity of this dish in Japan began in the early 1950’s. Ms. Shimbo’s addition of “-don” follows the format of her book that indicates that this dish is served over rice.
. 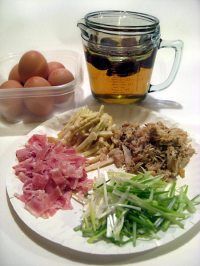 Procedure:
Cut away the stems of the mushrooms. Julienne the caps. To the large bowl in which you have beaten the eggs, combine the julienned mushrooms, bamboo, onion, crab, and pancetta. Add a pinch of salt.
Heat a skillet (use a skillet about the size of the bowls you will serve in). Add oil for pan-frying. Add half the egg mixture and cook the first omelette on both sides. Then the second. Keep the eggs warm.

Wipe the skillet with a paper towel, and add the sauce ingredients: first the sake (to cook off the alcohol), then the stock, sugar, and shoyu. Mix the potato starch and water and add; stir to prevent lumps, and cook to thicken. Finally stir in the sesame oil.

To serve:
Put half the rice in each dish. Cover it with the omelettes. Serve with the sauce poured over the rice/omelette bowl.

One thought on “Kanitama-don: Japanese Crab Omelette with Rice”