While Arthur Dent and Ford Prefect traveled the cosmos to The Restaurant at the End of the Universe, Mr. Tess and I went down the street from our hotel to Cosmos Cafe & Pizzeria. We found nothing fundamentally wrong with the universe while enjoying a delicious Italian meal at an outdoor table, surrounded by Christmas lights, palm plants, and the parking lot. It was a pleasant place in the space-time continuum at the end of November. 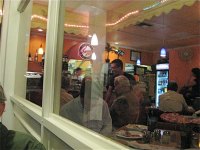 from the sleet, snow, and ice of Michigan.
Can see the reflection of the parking lot and palms? 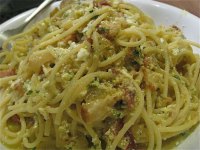 Mr. Tess surprised me by ordering spaghetti carbonara with bacon, onion, egg, and pepper. Before we were married, we lived in a house with six other people. We all took turns cooking. One of the housemates was a university student from Italy; he did not like sharing the cooking—though I noticed he liked to eat—and the only dish he knew how to make was spaghetti carbonara. There were some vegetarian issues in the house;

and besides, usually we couldn’t afford meat so he made it without bacon. It was rather dry and not well mixed: some got a lot of egg,  some mostly noodles.
I had one of the night’s specials, braised veal shanks with ziti. Excellent. I couldn’t eat all of  the sauce, but the kitchen packed it up for me with some extra pasta and it made a great lunch the following day. 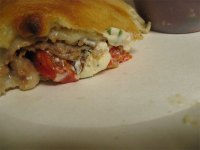 On the evening before I had to leave it seemed like a good idea to have calzones from Cosmos. This time Mr. Tess went and got them so we could eat in the room and relax with some television and reading. Again the food was delicious. I ate half of my calzone before I though about taking a picture. I used to make calzones, but these were much better. I never discovered the secret of getting the right amount of filling inside. These were perfect.


Cosmos: an orderly or harmonious system/ the universe seen as a well-ordered whole / a system of thought
Our local library used to lend framed artwork, and I remember a watercolor showing the tussled bedding, a window with shear white curtains open to a morning garden full of colorful flowers. It was called “Cosmos in the Morning.”

From Wikipedia: In theology, the term can be used to denote the created Universe, not including the creator. The Septuagint uses both kosmos and oikumene for the inhabited world. In Christian theology, the word was also used synonymously with aion to refer to “worldly life” or “this world” as opposed to the afterlife.
The cosmos as originated by Pythagoras is parallel to the Zoroastrian term aša, the concept of a divine order, or divinely ordered creation.

I wonder why there are so many restaurants named “Cosmos?” There is even one here in town: Kosmos—been serving Korean food for years.