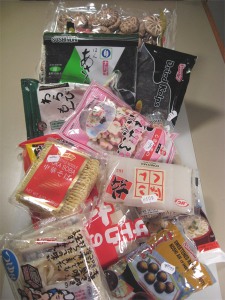 I ran out of rice the other day, and made a trip to the Japanese grocery store. It’s always fun to go there to just look around. I saw they finally had Saikyo miso (sweet white miso) and though corn syrup was listed as an ingredient, I put it into my cart. It’s a different brand, but it’s imported from Japan so I hope it’s good.
There was an assortment of konyaku: brown, grey, and white. Konnyaku is taro gelatin; it doesn’t really have a flavor, but the texture is chewy. Konnyaku is a popular diet food in Japan with it’s almost zero calories and high fiber. I’m planning to make Racoon miso soup and konnyaku is featured, so into my cart it went.
A package of large beautiful dried shiitake mushrooms from Japan caught my eye, until I saw the price so I settled for nice mushrooms from China.
So far, so good at keeping to my list. But this time the store had my usual brand of kombu for making dashi. And near-by, I noticed nori and thought I should make some sushi rolls. Oh how could I resist the pretty flower-shaped fu to float in soup! Koshi-an (sweetened red bean paste) reminded me of one of the first recipes I made from my book, some delicious steamed manju. I’ve not made them again because it was so much work to make the bean paste. There was arrowroot powder and there is a recipe that calls for that! There was a new brand of plain ramen noodles I had to try. Then I saw udon, and they had some dry kishimen, which is flat like fettuccini. In the next aisle, there were mochi. They were so good at New Years!

As I walked past the freezers I noticed a selection of Sanuki udon noodles. They looked good for lunch. Udon are wheat flour noodles, usually long, thick and round. Sanuki udon are thicker than other udon. The dough is rolled flat then cut so they are square. Sanuki udon are supposed to have a firm, chewy texture, made with a specific type of wheat which was traditionally grown in Kagawa Prefecture.
When I got home, I took a picture of my purchases (a perfectly normal thing to do, right?) and put the packages away. 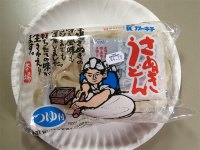 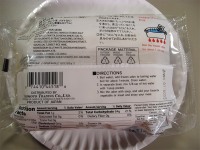 Somehow I put the frozen noodles into the fridge rather than the freezer. Of course, they’d thawed. The package contained 2 servings, each in its own little bag with its own little packet of concentrated broth. I found some sugar snap peas and shrimp in the freezer and dinner was ready in a snap. The noodles were not chewy, but the broth tasted good. And I love peas with shrimp. 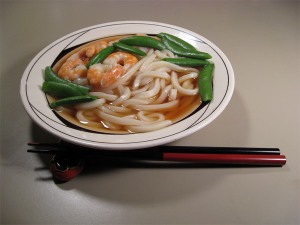 I cooked both packets, and saved 1/2 for lunch at work the following day. To keep the noodles from getting soggy, I put the broth into a separate container so they could be microwaved individually.

Did you remember that I was going to buy rice? I didn’t either… 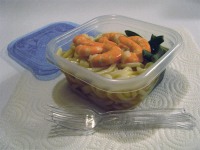