Donburi is not quite a recipe, but more a method of serving a bowl of rice with a topping and a sauce. The most common toppings are tendon, katsudon,
and oyakodon. Note that “donburi” is frequently shortened to “don.” 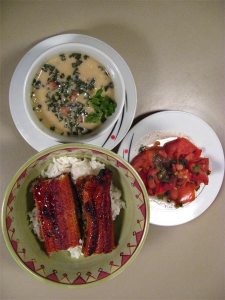 And today’s post:
Unagi Don
Freshwater eel over rice.
As noted, this is not so much a recipe as an opportunity to bring this dish to the attention of my readers. Unagi is not usually cooked at home in Japan, rather people go to restaurants specializing in unagi dishes. But luckily for us, unagi kabayako is easily found, frozen, cooked and ready to grill or warm up and serve over rice. Toppings can include shredded shiso, nori cut into small pieces, special unagi sauce (similar to tonkatsu sauce), sesame seeds, and sansho pepper.

Here is an excerpt of a very fine post about unagi and wonderful pictures of various ways to cook it and a most excellent blog:

In the early Edo period (1603-1868) unagi was considered a low class and unsophisticated food due to the fact that it was caught, chopped, roasted and eaten in the field by laborers and also because of its high fat content.By the late Edo period though this had changed due to various unagi cooking processes being developed in the capital, namely kabayaki. With kabayaki, fish, generally unagi, is boned, put on metal skewers and grilled over charcoal while being dipped in a thick, sweetened soy sauce several times throughout the grilling process.

Today, unagi kabayaki is usually served on top of rice, as donburi, or unagi-don.
Kyoto Foodie 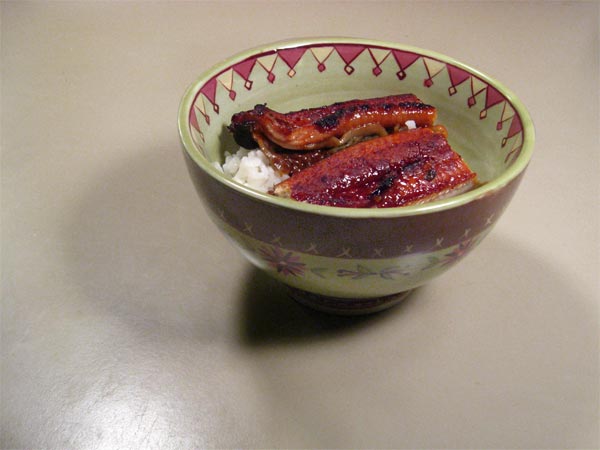 There are serious questions about the sustainability of the world eel population. Though most of the eels consumed are from farm-raised stock, many environmental groups caution consumers to avoid eating freshwater eels. Farming operations supplying eels for unagi use young, wild-caught glass eels for stock, putting pressure on wild eel populations already in severe decline because eels cannot be bred in captivity. Farmed eels consume large amounts of wild-caught fish for feed, impacting other fisheries. Farming operations discharge untreated wastewater, degrading habitat and spreading disease from farmed eel to wild eel populations.

Freshwater eels, like other eels, have long, snakelike bodies.
Eels from the Anguilla family develop in three distinct stages: from glass eel, to yellow eel, to silver eel. Larvae turn into glass eels that lack coloration. During this stage, eels move from the ocean to coastal estuaries.
As the eels gain pigmentation and become yellow eels, they move to freshwater. Finally, these eels metamorphose into silver eels, when they are able to reproduce. The eels return to the ocean to spawn where they die soon after.
Environmental Defense Fund
Advertisement