https://1tess.wordpress.com
To break the Yom Kippur fast, I wanted to make something light, flavorful, and easy to eat and cook. Last year I made kreplach before the fast, and I considered making them this year to break the fast, but I didn’t want to spend the day preparing food in front of my husband, who was fasting and I wouldn’t have time to make them after he left for the evening service.
I looked through The Book of Jewish Food, by Claudia Roden. This is a cookbook with over 800 recipes, with which Ms. Roden traces the history of the Jewish diaspora through recipes taken from one country to another. She found many of the recipes by interviewing women who still cook their traditional family recipes.

In the chapter about grains (rice, bulgur, pasta, and couscous), she discusses Jews in Italy, a very small community much reduced after the 1938 Fascist racial laws and Nazi deportation. She notes that Italian Jews, with a repertoire of cold Saturday (Sabbath) dishes were eating cold pasta long before it has become fashionable. These “pasta salads” have bold flavors including one with a sweet and sour tomato sauce (or dressing), and another sauce with lots of anchovies and garlic. (We had the best anchovies in Spain and I’m guessing Italian anchovies would also be amazing.)
And there was one with a sauce made with eggs and lemons. Does this sound familiar: Greek avgolemono sauce?

The recipe is called Tagliolini con la Bagna Brusca o Salsa Agresta, and is a speciality of the Marches (Italy’s east coast).
According to Cucina Ebraica: Flavors of the Italian Jewish Kitchen, by Joyce Esersky Goldstein: “Brusca means “tart” or “sour,” and bagna comes from bagnare, “to wet” or “to bathe.” This sauce is related to the Separdic agristada, made with sour grape juice (verjus), and it resembles the familiar Greek and Turkish egg-and-lemon avgolemono sauces used for thickening meat and vegetable stews at the last minute.” 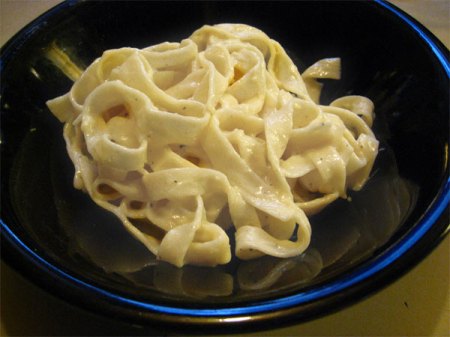 So who could resist pasta in a sour bath(e)?
Tagliolini con la Bagna Brusca o Salsa Agresta
Tagliolini with Egg-and-Lemon Sauce
from The Book of Jewish Food
by Claudia Roden
serves 6
page 475

Make the sauce first. Bring the chicken stock to a boil. In a bowl, beat the eggs and yolks with the lemon juice. Beat in a little of the hot broth. Pour the mixture into the simmering broth, stirring vigorously over low heat until the sauce thickens. Do not let it boil or your sauce will curdle.
Cook the tagliolini in boiling salted water until done al denté then drain. Dress with olive oil, salt and pepper so they don’t stick together. Cool. Then dress with sauce.

In this recipe (written in Italian, translated by Google) it seems the cook is to turn the pasta onto “a pastry board or on the marble table, why not passion of cooking. Stir frequently until they are completely cool…” And I would have done so, if I had a marble table: Once noodles are cool, they don’t stick together as easily.

The Author’s Variations:
For a thicker sauce, mix 1 Tablespoon with a little water, pour into the simmering stock, and stir until it thickens, about 15 minutes. Proceed with adding the lemon-egg mixture.
Instead of lemons, agresto (verjuice), the very sharp juice of immature grapes was once used.

When I prepared this recipe last year it had been years, perhaps decades, since I’d eaten liver. I remembered liver as tough and flavorless, but the recipe is in the book, and my plan is to eventually cook all the recipes. My husband was out of town so I wouldn’t have been subjecting him to a “bad” meal. I was surprised. It was divine! Succulent. Delicious. Amazing. My husband certainly missed out!

Time passed, things happened, and I forgot about liver and garlic chives. So much for revelation…until I came across my post and remembered that I hadn’t shared this wonderful meal with my luv. Now that we have shared the pleasure, I am reminding my readers to try it too.

Have a large bowl of ice water at hand. In a medium pot of boiling water, blanch the liver until the outside turns pale, about 20 seconds. Drain, and plunge the liver into the cold water. Rinse the liver and drain again. Pat dry with paper towel.
In a bowl, combine the sake, salt, shoyu, and pepper. Add the liver to the bowl, and toss. Add the potato starch and stir gently. Add the sesame oil and stir again. Refrigerate, covered, for 20 minutes.

Preparing the Vegetables and Sauce:

Combine the chicken stock, shoyu, and sugar. Mix the potato starch and water in a separate container.

Heat a wok or skillet, and add ½ cup oil. Heat to 360°F. Add half the liver and cook until the surface is golden. About 1 to 2 minutes. Remove liver to a plate and partially cook the other half the same way. Set aside.
Remove most of the oil from the skillet, leaving about 3 Tablespoons. Turn the heat to high. When the oil is hot, add the Chinese chives, and stir-fry them until they begin to wilt. About 20 seconds. Remove and reserve.
Add 1 Tablespoon of fresh oil to the skillet and fry the ginger and scallion over low heat for 20 seconds. Increase heat to high. Return the liver to the skillet. Pour in the chicken-stock mixture and toss vigorously for 2 minutes.
Return the chives to the skillet, and stir-fry for 30 seconds.
Reduce heat to low. Give the potato starch slurry a stir and add it to the skillet. Stir until the sauce thicken.
Add the sesame oil and pepper, toss. Serve hot with plain white or brown rice.

3 thoughts on “Break-Fast: Pasta in a Sour Bath”