({[So, readers! I’m moving on to another html trick/technique. Keep up with me by hovering over the orange text to read more information.]})

Yoshoku recipes were developed during the Meiji period. The Emperor lifted the ban on red meat for commoners, and promoted Western cuisine, in hopes that the Japanese would become as large and strong as Westerners.
(examples of Japanese Western-style dishes)

Hamburger steaks are called hambaagaa or hambaagu in Japan. They are very popular in cafés for lunch or dinner, and are often cooked at home for children. For adults, it’s a nostalgic meal bringing cozy memories of childhood. Hambaagu has become a truly Japanese food. 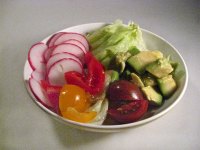 Hambaagu don’t have much in common with the American style of hamburger, except for the fact that they both start off with ground meat and are fried in a pan. A Japanese hamburger has more in common with American meatloaf, and a rather similar texture. Most recipes call for both ground beef and ground pork, panko (sometimes soaked in milk), or fu, chopped onions, egg, and flavorings.

The first time I made hambaagu, the patties were flavored with saké and miso. Another recipe uses nutmeg, salt, and pepper. Today’s recipe includes garlic, ginger, soy sauce, Worchestire sauce, and mirin. The sauce can vary as well: sugar, water, and soy sauce; red wine, ketchup, and tonkatsu sauce; soy, vinegar, demi-glacé, and tomatoes or other fruit… Sometimes people include mushrooms in the sauce.

Western food was adapted by the Japanese, then returned to the U.S. in the form of Hawaiian Loco Moco— each bite a taste of paradise!

Itadakimasu! Besides foods, the Japanese have also borrowed words from foreigners. These words are called gairaigo and are transvocalizations of foreign words into Japanese sounds. They are usually written in katakana. For a long time the Japanese thought words should be written as much as possible in kanji so the oldest foreign words are written in kanji. At this point, I’m completely out of the Japanese spelling bee here! The Latin alphabet (Rōmaji) is enough to keep me well entertained! Gochisosama! 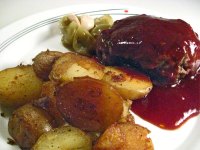 Hambaagu
Japanese-style hamburgers
serves 2 to 4
my own recipe

Combine all of the above ingredients in a bowl. Knead with your hands to ensure even distribution. The Japanese will often gather the meat mixture, lift it, and throw it back with force into the bowl, repeating this action 4 or 5 times. The mixture will be fairly soft, but the tossing ensures the meat will hold together. Divide the meat mixture into 4 equal portions, and shape each portion into an oval patty about 4 inches long, 2 ½ inches wide, and ¾ inch thick.
Cover tightly with plastic wrap and refrigerate. Let the patties rest in the fridge for at least 2-3 hours so that the flavours in the meat mixture can develop.
Heat some vegetable oil in a pan. Slide the burgers in and cook. Remove burgers and keep warm while you make the sauce. Drain excess fat.
Sauce

Combine the wine, ketchup and tonkatsu sauce. If there is a lot of good stuff browned on the bottom of your pan, deglaze with 2 Tablespoons of water. Add the mixture above, heat.
Serve the burgers on fresh hot white rice, and drizzle sauce over them.
I served these with some potatoes—my preference this evening.

My name in katakana: テッス