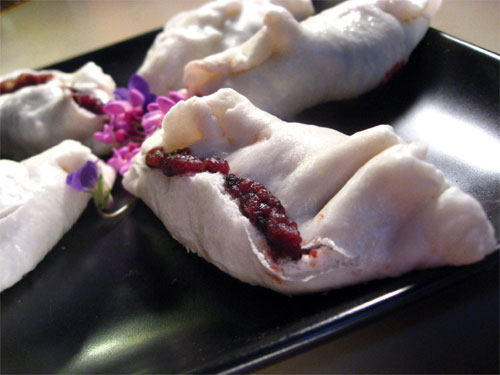 Ah: as you can see this recipe is not won—there is yet an opportunity for the joy of doing it again. LOL
I play the fool with quotes spoken out of context yet again: of course this is no tragedy of misguided romantic strategies, arrogant young love, and people of legend. It’s only that I have not made this recipe successfully and I will have the “pleasure” of trying another time for success. Don’t let my incompetence deter you: this tasted great all the three times I’ve tried. The sloppy unappealing appearance is result is my own “pie crust curse.” As much as I love foods wrapped in dough, my pies are always tragedies. Oh you know, in perspective: just a mess.

In a medium pot, combine the sweet azuki paste and 4 Tablespoons water. Cook over medium heat, stirring, until they are thoroughly mixed. Add the sesame seeds, and stir thoroughly. Transfer the mixture to a large pan, and let it cool to room temperature. Divide the bean paste into 12 portions.
Sift the flour and baking powder into a medium bowl.
In a small saucepan, combine 2 Tablespoons water and the sugar, cook the mixture over low heat, stirring, until the sugar is dissolved. Transfer the liquid to a large bowl and cool to room temperature.
Add the flour mixture to the sugar liquid, and mix with a wooden spatula. Form the mixture into a ball, and let it stand, covered, for 30 minutes.
Line a bamboo or metal steamer basket with parchment paper, and place the steamer basket over plenty of water in a deep pot over high heat.
On a floured counter, knead the dough briefly, 10 to 20 times. The dough should be as soft to the touch as your earlobe. Roll the dough into a long, thin snake and cut into 12 equal pieces. Flatten one piece of dough with your palms into a 1-inch disk. Place the dough disk on one hand, pick up one portion of the bean paste with the other hand, and wrap the bean paste in the dough. Make 11 more dumplings in the same way.
Transfer the dumplings to the paper-lined streamer. Cook them over high heat for about 10 minutes.
Serve the dumplings with ryokucha green tea or bancha brown tea.

A bit ago, at my work, there was a mother chastising her misbehaving daughter. “Paris!!! stop that!” “Paris: come here NOW!” “Paris—what do you think you are doing.”
When they finally left, I asked my boss why anyone would name their daughter “Paris?”
(all those tabloid stories!) Anyway, I thought “Paris” was a man’s name, and that he was in a play written by Shakespeare.

I was curious about the name “Paris” so googled and found that the city in France is not named after a person.
The Greek, “Paris,” (child of a god and goddess??) grew up to become a beautiful man, and commanded to choose who was most beautiful of the godesses: Hera, Athena, and Aphrodite. When Aphrodite dropped her gown, the normal man made his choice: Aphrodite promised him the most beautiful mortal woman: Helen (whose face launched a thousand ships). Paris stole her from her husband, and through complicated politics, the Greeks made an expedition to Troy to take her back. It may have been Helen’s face, but it was Paris’ perfidy which provided the spark for the Trojan wars.

Then a search for “Paris + Shakespeare” and I found the play:
Troilus and Cressida
so my foolish associations have now come together.

Here is Cressida, after love at first sight of Troilus, a soliloquy:
Act 1, Scene 2


Words, vows, gifts, tears, and love’s full sacrifice,
He offers in another’s enterprise;
But more in Troilus thousand fold I see
Than in the glass of Pandar’s praise may be;
Yet hold I off. Women are angels, wooing:
Things won are done; joy’s soul lies in the doing.
That she beloved knows nought that knows not this:
Men prize the thing ungain’d more than it is:
That she was never yet that ever knew
Love got so sweet as when desire did sue.
Therefore this maxim out of love I teach:
Achievement is command; ungain’d, beseech:
Then though my heart’s content firm love doth bear,
Nothing of that shall from mine eyes appear.