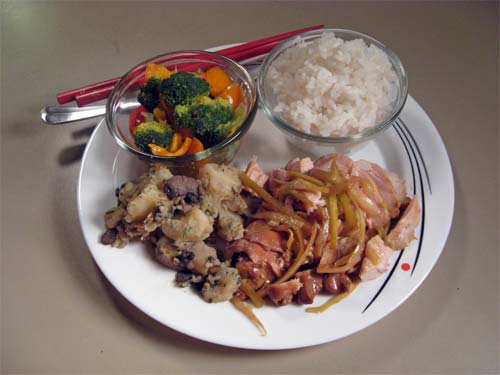 If you have only a little time for cooking, then tori Namban-zuke is a Japanese chicken recipe that is essential to your repertoire. It can be prepared quickly, at your convenience, then left to marinate for up to five days.

It can be served hot or cold, as an appetizer for a party, as a salad/side-dish, or as a main course. Cook the chicken once, then serve it in several different ways!

The years between 1549 and 1639 are sometimes called the Namban Period in Japan. Chinese and “Southern Barbarians” (Namban) were permitted to trade through the port of Nagasaki. The Portuguese empire reached from Brazil, parts of Africa, India (Goa), South East Asia, and Japan. This trade brought many new foods and spices from one part of the world to another; of interest in this case is piri piri (small, fiery chilli peppers). The hot red peppers influenced the flavors of many cuisines, including Portugal itself. The small red peppers in Japan are called akatogarashi. The Portuguese also brought the combined techniques of frying and marinating to Japan.

Eventually (Protestant) Dutch and English traders encroached on the (Catholic) Portuguese trade with Japan. This led Japan to enter a 200 year period of seclusion, retaining the Dutch as the sole Western trading agents, but that is another story…

Chicken in Spicy Vinegar Marinade
Tori Namban-zuke
revised from The Japanese Kitchen
•250 Recipes in a Traditional Spirit•
by Hiroko Shimbo
page 415
serves 6 to 8 ?
The original recipe is meant to serve 2, but because this can be a planned second (even third) meal, I have adjusted it for making several meals.

If you use thighs with skin, prick the skin with the point of a knife. In that case I dust a little salt over the skin, then rinse and dry it before frying.

Remove the kombu from its soaking liquid. Discard the kombu. In a saucepan, bring the kombu stock, rice vinegar, sugar, and shoyu to a very gentle simmer. Stir to dissolve the sugar. Remove from heat and add the chile. Reserve.

Heat the oven to 350°F.
In a skillet, heat the oil over medium heat. When the oil is hot, add the long onions and cook over medium heat until they are slightly golden. Remove with a slotted spoon, drain, and add to the marinade.
Heat the oil in the skillet again. Brown the chicken on both sides, paying special attention to making the skin nice and golden. For skinless thighs, a quick very hot sear is enough. If you want to try this recipe with skinless, boneless chicken breasts, then I’d suggest steaming them to cook—white meat gets dry and tough with dry heat.
Remove the chicken from the skillet and drain on paper towels.
Transfer the chicken to an oven-safe dish and bake for 20 to 25 minutes, until cooked.

Marinate: Cool the dish until you can add the marinade without fear of shocking the glass (ie: cracking). Refrigerate overnight or for as long as 5 days. 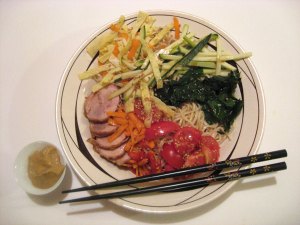 To Serve Cold:
Slice the marinated thighs, arrange attractively in dishes, arrange the onions with the meat, and pour a generous amount of the vinegar marinade over.
Or:
Serve the chicken slices over a salad. Plain lettuce, or greens and slices of grilled vegetables. Dress with a bit of the marinade.
Or put slices of chicken in baby endive leaves—like a wrap, and dip them in the marinade.
Or use sliced chicken on Hiyashi Chukasoba instead of chasu or ham.
Or to Serve Hot:
Reheat the chicken and the marinade (microwave or oven). Serve it with fried potatoes and smooth French-style mustard.
Or serve the sliced chicken with mashed sweet potatoes.

More ideas to use this chicken:

One thought on “Japanese Barbarian-Chicken”