This recipe is similar to one I’ve enjoyed often, but the method of preparing the thin slices of pork is ingenious. We’ve all heard about partially freezing meat to make it easier to slice thinly. In this recipe Ms. Shimbo has the cook use a mallet to pound pork cutlets thin. Pounding the meat means no need for knife skills!

I’ve made variations of this recipe, served with different vegetables, as donburi, as sandwiches, and they are all delicious! I even carried a bento with ginger pork on a plane to Florida—much tastier the the tiny packet of dry pretzels, though perhaps I’d advise leaving out the garlic…

Place each pork cutlet between sheets of plastic wrap. Use a mallet (or flat bottomed jar, or saucepan) to pound the cutlets thin and each has spread out about 50% larger than the original. Cut the pork into narrow 3-inch strips.

In a colander over a bowl, drain the marinade from the pork. Press the meat with a spatula to extract as much liquid as possible.

Heat the oil in a large skillet or wok over medium-high heat. Add the pork strips in a single layer. Cook only until golden, turning once; do not overcook. Remove the pork to a plate.

Add the mushrooms and stir-fry until most of the liquid had come out and evaporated. Add the peppers and stir until they have softened.

Return the pork to the pan, then stir in the marinade and cook until the contents are well coated and the sauce thickens. Add about half of the sesame seeds and onion greens. Stir to combine.

Toast the buns, and butter the bottom side if you like. Divide the lettuce among the 4 bun bottoms. Distribute the meat and vegetables over the lettuce. Cover each bun and serve.

I bought pita bread because the hamburger buns at the regular grocery store are flavorless pillows, but in the end we just ate this meal donburi-style over rice. 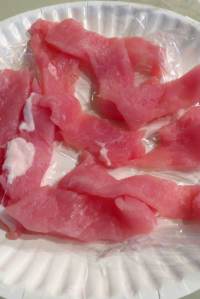 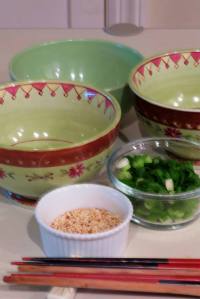 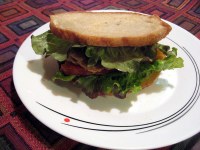 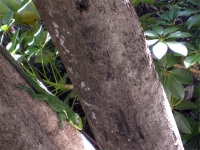