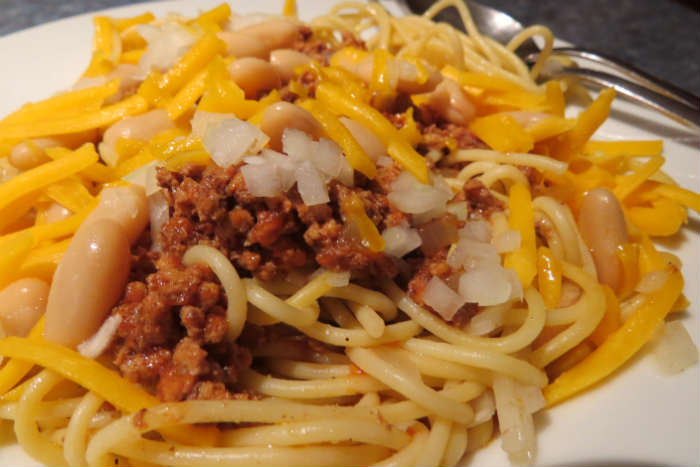 “Next to music there is nothing that lifts the spirits and strengthens the soul more than a good bowl of chili.”
Harry James (1916-1983) band leader and trumpeter

My mum used to serve a Midwestern-style chili made with hamburger, tomatoes, oregano, garlic powder, and kidney beans on macaroni elbows. It was a way of stretching a pound of ground beef to satisfy a family of six inexpensively. I recall we even added grated Cheddar cheese to top it so very very elegantly. It wasn’t until I started this project to learn Japanese cooking, that I first heard of this delicious and somewhat exotic version of Cincinnati chili from a lovely woman called Jean on the Taunton Press Fine Cooking magazine forum. It’s become a favorite meal, and I want to let my online friends know about it.

Cincinnati chili comes from much farther away than Mexico, Spain, or Texas. It’s the result of a Mediterranean imagination and good business sense. Because the chili is seasoned with cinnamon, cloves, allspice and chocolate, served over spaghetti, and topped with cheese, beans and onions, some claim it is not chili at all! Nevertheless, it’s extremely popular in Cincinnati, and in towns located at the intersection of Ohio, Kentucky, and Indiana.

The Cincinnati chili pioneers, brothers Thomas/Athanas and John/Ivan Kiradjieff followed their big brother Argie to Cincinnati in the early 1920’s. The first decade of the 20th century was a time of crisis and a catalyst for large changes: the Ottoman empire was crumbling, and the newly independent states of Greece, Serbia and Bulgaria were all vying for control of Macedonia. Many thousands of men emigrated to the United States. Most were of soldiering age, between fifteen and twenty-one, and were refuges of the Balkan Wars and World War I.

Tom and John Kiradjieff did a very common thing among Greek and Macedonian immigrants by going into the food business. What they accomplished was very uncommon among restauranteurs: they created an entirely new food category.

In their first restaurant, called The Empress Chili Parlor (October 1922), the Kiradjieffs served American-hot dogs, with chili on top, already known as the Coney Island on the U.S. east coast—something almost probably familiar to the large German immigrant community of Cincinnati assimilating to their new homeland. More interestingly, they also served an Americanized version of a Greek stew they called chili spaghetti. The Mediterranean stew that inspired Cincinnati chili was probably a lamb stew, not beef—lamb being more readily available in the hilly Macedonian countryside. Many food writers have tried to attribute ancestry of this chili to Greek dishes like pastichio and moussaka. When asked which specific stew inspired his uncle John and his father Tom, Joe Kiradjieff threw his hands up and said, “I don’t know!”

The original chili parlor became a mode of chain migration, by hiring newer Greek- and Slavic-Macedonian immigrants. Many employees learned a successful business model which they used to start their own chili parlors. Empress, Skyline, Gold Star and Dixie Chili all employed these Greek and Slavic-Macedonian immigrants. This influence centered around the area, making Cincinnati chili a regional speciality in the United States. Many of the men returned to Greece for brides, started families in the area, and established two Greek Orthodox churches, and made good livings with similar businesses.

from the Cooks Talk forum 1999

In large saucepan, slowly boil ground beef and water for 30 minutes. Add rest of ingredients (not the toppings) and simmer about 3 hours uncovered. Refrigerate overnight and skim off fat before reheating.

Best is prepared at least 2 days ahead.

Serve over cooked spaghetti with choice of toppings. This is also very good for a “Cheese Coney”: a hot dog on a bun, topped with chili and grated cheddar cheese, mustard and a small amount of onion. 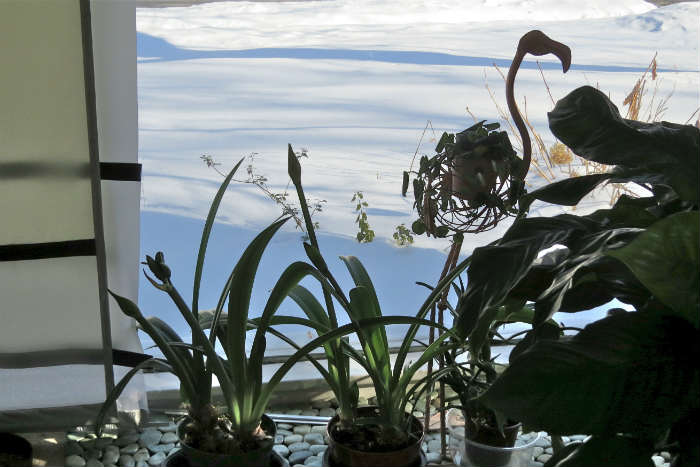 Life is a beach until you examine it. White sand, sun, tropical plants—ah!
So much snow this winter, and the clear sunny sky means it’s too too cold.

“Chili, as we know it in the U.S., cannot be found in Mexico today except in a few spots which cater to tourists. If chili had come from Mexico, it would still be there. For Mexicans, especially those of Indian ancestry, do not change their culinary customs from one generation, or even from one century, to another.”
Charles Ramsdell, a writer from San Antonio in an article called San Antonio: An Historical and Pictorial Guide

One thought on “Jean’s Cincinnati Chili”