Consider a little taste of Japan combined with a taste of Australia. Think of traditional Japanese flavors: sake, mirin, shoyu, and miso. Though Australia is famous for its lamb, and I’ve posted a couple of lamb recipeson my blog, I am cooking meat from another famous Aussie animal—no! not the koala.

How a (giant) kangaroo would look in the field across the street from my house!

A reader-friend from Australia suggested that I try kangaroo. It’s a nice lean meat; kangaroos are well adapted to Australia’s climate and less stressful on the land than sheep. We were discussing a variety of topics on my pastie post (food wrapped in dough). I mentioned that some Michigan deer hunters make pasties with venison, also a very lean meat. She cautioned that kangaroo might not be suitable; “it can be tough if more than shown the surface of a hot pan.” 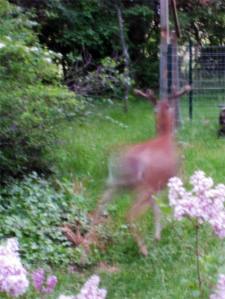 A young buck in my backyard…

The meat appeared to be one piece cut into thirds, and a fourth piece, about the same size, from another animal (?). The label called the cut “medallions,” so I expected rounds of boneless meat but these were more like “chunks.” 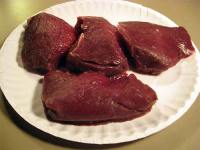 I cut each piece into quarters, noting to myself now that I should not have cut them so small—or possibly not at all: it would have been better to cook the meat as a large thick steak which would be sliced upon serving.
There was plenty of “juice” once the meat had thawed, so I washed it carefully with cold running water and thoroughly dried the pieces with paper towels. 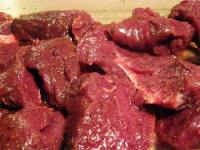 I’d found a suggestion online that the meat should be sprinkled with freshly ground black pepper and marinated in oil for 20 to 30 minutes.
Meanwhile, heat a skillet on high. Add the oil and when it is hot, lower heat a little, then add the sliced mushrooms. Cook and turn them until they stop exuding moisture and have begun to brown.
Over a high flame, heat a large skillet. Pour the marinade oil in, and heat. Add a few slices into the hot pan to brown quickly turning only once. The trick is to add and remove the meat so the pan stays searingly hot. If you add too many at a time, the pan will cool and the meat will brown more slowly. They just need a kiss of heat to add a nice caramelized flavor. In the picture, mine are a tad more done than they should be.

Deglaze the pan with (hot or even boiling) water, scraping up the delicious frond from the bottom. Lower the heat to medium-low (add a little more water if it boiled away before the pan was completely deglazed). Stir in the mushrooms. Deglaze the pan with the saké and stir that in with the mushrooms. Put the mirin and soy sauce into a cup and stir in the miso to dissolve. Pour that mixture into the pan and stir. Add the Balsamic vinegar. Taste: you may want a bit more miso or mirin. Heat on low. Turn off heat and stir in the slices of meat.

We completed this meal with boiled red potatoes smashed with salt, pepper, and butter; sauteed zucchini and broccoli; and radishes for color and crunch.

I’d cook kangaroo meat again: it costs about the same as a nice beef steak, tastes great, is low in fat. It would be interesting to use the fast-fry in oil technique (and maybe the flavorings) used in the black sesame seared tuna recipe.

9 thoughts on “Kangaroo for dinner”