Making soba reminded me of another favorite buckwheat noodle: pizzoccheri—a northern Italian buckwheat pasta dish with cabbage, potatoes, and cheese. Though it doesn’t qualify as Japanese cooking, I am including my recipe here because the noodles are much easier to make than soba because the dough is made with eggs. If you have aspirations of making soba, I’d suggest you start with these noodles to get a feel for how buckwheat dough behaves. 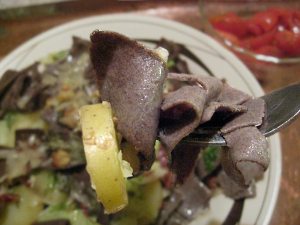 Pizzoccheri (I tried a different recipe from my usual one)
serves 2 to 3
The Noodles:

Combine the flours and salt in a food processor. Use a syringe (or an eyedropper) to add the eggs to the flour; put 6 to 8 drops of egg around the bowl of the processor, pulse, repeat. As you add the drops, you’ll see that at first they sit on the flour like beads, but a little more than halfway through, the egg droplets suddenly begin to sink into the flour. When you can squeeze the dough into a ball (my dough needed about 2 teaspoons of water more), knead for 10 to 15 minutes. I really like putting the dough into a zip-lock and using my feet for kneading, but this dough was much easier to work than the soba!!!
Let the dough rest for 30 minutes to an hour. Roll through a pasta machine as usual. Cut the sheets into noodles 1/2″ by 2 1/2.” 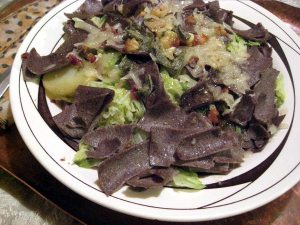 Chop the pancetta and fry it in a small pan until crisp. Reserve. Melt the butter in the same pan and add the sage and garlic. On low heat, simmer for a few minutes. Warm your oven to 300°F.
The Vegetables:

Boil the noodles al dente. Remove them from the pot with a slotted spoon (or a wire sieve) to a bowl. Cover and put into the oven to keep warm (turn oven off). Bring the pasta water to a boil again and add the cabbage and potatoes. Cook until the potatoes are soft. Drain.
To serve, layer noodles, vegetables, and cheese in soup bowls. Top each bowl with pancetta. Pour the sage butter over each bowl. I should have added a garnish of a fresh sage leaf. 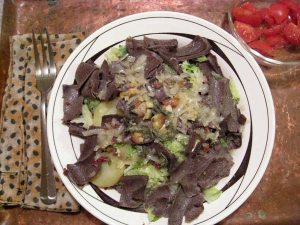 While we were eating, we got to talking about buckwheat. Buckwheat flour is made by grinding the the nuts or groats from a plant that is related to rhubarb (Polygonum fagopyrum). The groats are known in the U.S. as “kasha,” and it’s usually available in the Jewish food section of grocery stores. It is cracked roasted buckwheat “seeds.” I used to cook it quite often as a starch-side dish.
Mr. Tess mentioned that the word “kasha” is a Russian colloquialism referring to “peasant food.” I found an interesting discussion online (read some quotes below) and perhaps he was remembering this Russian proverb:

“Shchi da kasha–pishcha nasha”
—Cabbage soup and kasha is all we need to live on.

…buckwheat is a grain native to Central Asia. Variously, the saracens, the Moors of Spain, the Crusaders and the Turks are credited with spreading buckwheat to Europe. Buckwheat is generally found in places where other grains won’t grow well and where the people eat “robustly”. Brittany, Finland,Northern China, Styria in Austria, central France and the Tyrolian Alps.